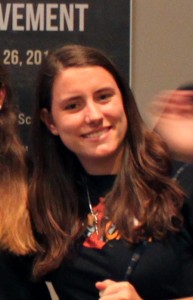 My name is Maddie Harrison and I am a student leader in the Any1Can Club at Myers Park High School in Charlotte, NC.  Our mission is to spread awareness of global issues (like poverty, hunger and education) that affect peoples’ lives no matter where they live in the world and lead our student body in service projects that make a difference to these issues.  Our club feels one of the most important issues is education and we’ve chosen to address that issue in South Sudan, the world’s newest country, where less than 2% of boys and less than 1% of girls complete primary school.

Since I can remember, I’ve been taught that if I really want it and work hard, I can do anything. I grew up hearing this message repeated over and over again – in books, in movies, by parents and by teachers. Maybe it is a bit childish and naïve but the members of the Any1Can Club believe anyone can stand up and make a difference. Throughout history, from the Revolutionary War to the Civil Rights Movement, the people who led these efforts to create change were dismissed as crazy, insane, and idealistic. But look what they accomplished. They are now cited as primary examples of social and global change. 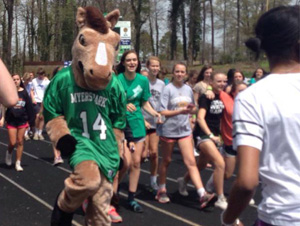 becoming one of many people involved in the Memes for Peace Project.  In 2013-14 students at our school learned about South Sudan in 9th grade English classes.  They read articles and books, watched films and attended assemblies to better understand the issues facing this brand new country.  Our club planned a Walk for Wisdom that involved 700 students and raised $4,400 for adult literacy in South Sudan.

We learned that education empowers people and ensures they are able to run a country and make progress. For South Sudan to flourish, the population needs to be educated. There’s no other alternative. But unfortunately, renewed conflict in South Sudan today means many good projects supporting education, clean water and health are challenged.  Groups like the Enough Project estimate that violence has returned to the levels it was at in 2003 before the end of the Sudanese Civil War. Over a million people have fled their homes. UNICEF estimates that as many as 50,000 children’s lives are at risk from the immediate threat of famine.

At the end of the year 9th

grade students created memes that combined photos of South Sudan with phrases from Romeo & Juliet, The Odyssey, The Hunger Games and Monster. The memes share the universal and timeless importance of conflict resolution and we are using them as a tool to create awareness and action about the current situation in South Sudan through the Memes for Peace Project.  Five of the memes were turned into postcards.  Nearly 3,000 people in Charlotte signed these on International Peace Day (Sept 21).  They will be sent to Washington, DC to ask elected officials to support peace and development in South Sudan.  In September, our club met with representatives from Senator Hagan and Senator Burr’s offices to share our concerns. 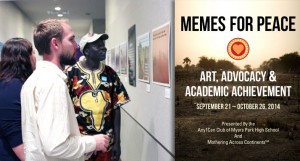 memes in an exhibit called Memes for Peace: Art, Advocacy and Academic Achievement.  We are proud of all that this project has accomplished but want to do even more.  And so we’re asking churches, schools and civic groups to get involved in Memes for Peace by hosting postcard signings and learning about the situation in South Sudan.

Can one program restore peace to an entire country at war? Well, we can shrug our shoulders and tell ourselves there’s nothing we can do. Or we can take a stand.  We hope that you will take a stand with us by signing a virtual Memes for Peace Postcard online at: http://www.motheringacrosscontinents.org/MemesForPeace/postcard.php and learning about other ways to get involved at http://www.motheringacrosscontinents.org/MemesForPeace.